Deprecated: Methods with the same name as their class will not be constructors in a future version of PHP; Recent_Works_Widget has a deprecated constructor in /var/www/hackmytown.unibz.it/wp-content/themes/floki/default-widgets.php on line 1198
 venue |

Glurns / Glorenza, the smallest city of South Tyrol. Also being called the jewel in the Venosta valley that surprise every visitor with its charming details.

Glurns/ Glorenza is officially a town even though having only 882 inhabitants. The town is being surrounded by a medieval fortification that creates a very authentic atmosphere not only for the inhabitants but also for the visitors specially during the Christmas market (Glurnser Advent).

The town was founded about 700 years ago,  since then have always played the role of a trade centre, the Mediaeval market town. Even today two important fairs take place there,  the Bartolomeo market in August and the so-called „Sealamorkt“ in November.

The city has been able to preserve its historic character as Mediaeval town and is considered an architectonic jewel. The city walls, the three watch towers and a series of fortified buildings surround a beautiful mixture of 16th century alleys, corners, marketplaces, town houses and arcades that create a charming, unique atmosphere.

The participants will have the opportunity to know the city through a guided tour offered by a local guide, in order to understand the way the town lives.

Students will be hosted (thanks to a unibz grant) at Hotel Post, from dinner on Sunday, December 21st to brunch on Tuesday 23rd December, full board. Any extras (drinks, coffee, etc.) will be paid by each participant.

Please, do not contact the hotel directly for reservations during the three days of the workshop, let us know your needs and we will keep in touch with the hotel. 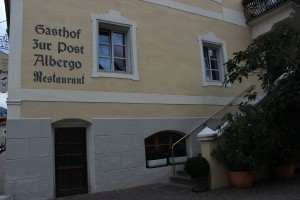 By train > a precise timetable will be added soon.

Please note, the city of Glurns-Glorenza does not have a railway station

* Special Notes:  extra details of how to arrive shall be provided in the following weeks.

Both comments and pings are currently closed.